Your shopping cart is empty
Visit the shop

Let me show you how to create unique and lasting memories through my fun-filled and inspiring home cooking classes.

Would you like to give your partner an unforgettab

Good Friday coming at you. This is "seafood open g

Would you like to give your mum an unforgettable b

Only the freshest and authentic ingredients needed to teach your chosen Japanese cooking class are brought to your home by Chef Tomo.

From $375 for one basic class (minimum of 2 courses, * maximum 5 people) *More than 5 people, $75 per extra person.
Advanced classes and larger or smaller number of people, discuss with Tomo
info@tomonese.com.au or
0410 254 210 Ingredients and Travel costs to your home are extra

All ingredients needed for the cooking class you choose are extra to class costs and are purchased and brought to your home by Chef Tomo to ensure the freshest and finest quality and authenticity. Based on a basic cooking class of 2 courses and 5 people per class, ingredients costs are approx. $20-$40 per person.
Advanced classes and larger or smaller numbers of people, discuss ingredients with Tomo
info@tomonese.com.au or
0410 254 210

Click BOOKING then type your details. You must type your requested date for your cooking class before you can submit. (2 weeks notice required) . I will contact you ASAP.

WHAT DO I BRING

All seasonings and ingredients are brought to your home. I prefer to use your kitchen and your cooking utensils mostly as this is an important part of learning and producing Japanese cooking yourself and in your own home. ** Please wear closed-in shoes because you will be handling knives and hot liquids.

Are the classes suitable for vegetarians and people with allergies?

Yes. We will do our best to accommodate all dietary requirements, however, some ingredients may contain traces of nuts and other allergens. Many traditional Japanese dishes contain some form of fish stock or soy sauce which are essential ingredients in Japanese cuisine. We have many recipes so let’s discuss your requirements. Talk with Tomo info@tomonese.com.au or 0410 254 210 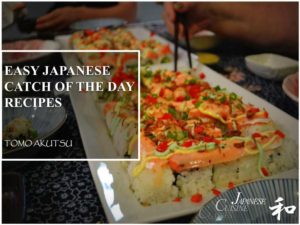